I’m spending 2018 helping English Heritage with their research. The chances were that if I worked on castles which were slighted, it would be via the English Civil War. It’s nice to beat the odds.

Orford is a fascinating place. The unusually shaped tower stands out more than it would have done originally since the curtain wall was gradually robbed out over the centuries. Orford itself was never slighted, unlike nearby Framlingham Castle. When Henry II founded Orford in 1165 it was his only castle in East Anglia and Hugh Bigod, Earl of Norfolk was the most powerful person in the area. 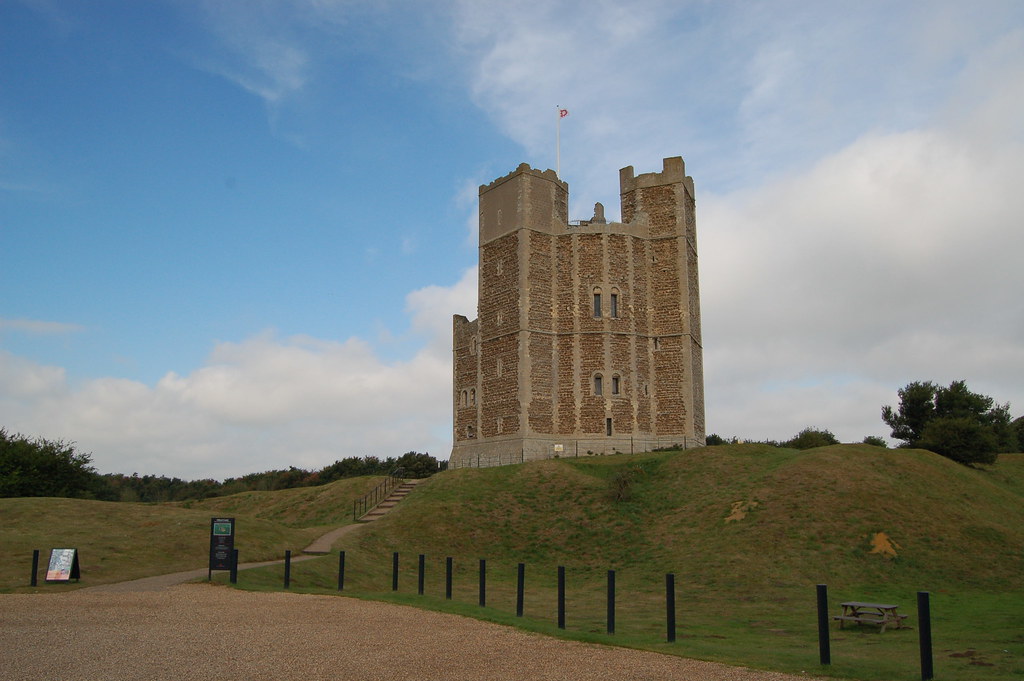 Hugh joined Henry’s sons in rebellion in 1173, and after the rebellion failed the earl’s castle at Framlingham was slighted. The work was overseen by Alnoth the Engineer who was also responsible for building Orford. To add an extra layer of intrigue, Orford Castle was built on land confiscated from Thomas Becket, but that’s another story.

In the tower there’s lovely chapel where you can see the remains of decorative plaster, a system of sinks and drains (including one in the basement with traces of red paint), and a prison which can only be accessed from a hatch in the floor of the tower’s entrance.

And then there’s Pevensey where slighting is more than just a tangent. You might recognise it from events such as the Norman Conquest. William landed at Pevensey Bay and then set up a castle in a corner of the Roman fort overlooking the bay. The outer walls are Roman with some medieval modifications, and though the castle was founded by William the Conqueror it was replaced and much of the castle we see on the east side of the fort was built in the 13th century. It was a royal castle for large stretches of its history and the episode that grabs my attention come during the reign of King John.

Pevensey Castle site in a corner of a Roman fort. The walls you can see today surrounded by a moat were built for Peter of Savoy, after King John gave orders to slight the castle in 1215. But were his orders ever followed? Photo by Vicki Burton, CC BY-SA.

In 1216 John was dealing with a rebellion; the barons objected to his rule and had invited the French prince to invade and take the throne. Having seen the French take Normandy from English rule during his reign, John was wary of an invasion and Pevensey was a likely place for the French to land. It would have been very symbolic for the French prince to land in the same place as William to Conqueror and lay claim to the kingdom. John gave orders to dismantle several royal castles along the Sussex coast, including Pevensey.

The interesting bit is it’s not really clear whether this was followed through. Of the standing ruins, the gatehouse may have been built around 1200, but aside from that the Roman walls are mostly intact and the rest of the castle is later than John’s reign. Excavations in the 1850s, 1920s, 1930s, 1960s, and 1990s haven’t found any clear evidence that the castle was slighted so it’s certainly possible that whoever was in charge of carrying out John’s orders decided to ignore them. In any case, the French prince didn’t land on the south coast but the east coast near Ely so John needn’t have bothered.

I’ve had great fun exploring the ruins of both castles and delving into their history. Another interesting aspect is that both were used as prisons. Underneath Orford’s entrance is a basement prison. It was kitted out with a latrine but that’s as far as comforts went with minimal light and no heating. It could only be accessed by a hatch in the ceiling (the floor of the entrance chamber) so was very secure.

Pevensey’s gatehouse (another fun piece of architecture with its D-shaped towers) has two rooms which could be prisons. In the north tower there is a metal grate in the floor which is the only way to access a bottle chamber. Is it an oubliette or a floor safe? The ladder would have been near vertical to access it, making life difficult for either use. Perhaps use as a dungeon is more likely, though the smell would have made the room above unpleasant to say the least.

Then there’s the basement room in the south tower of the gatehouse. This is accessed by a spiral staircase and there’s a slot for a drawbar on the outside of the door. The old Ministry of Works sign describes it as a dungeon, and as a secure room it could certainly be used as such. We know that the castle was used for holding both high-status and ordinary prisoners so there may have been purpose-built rooms for securing the latter. This would fit the bill, although again there’s no form of waste disposal.

Sadly I’m not great photographer, but if you want to see some decidedly average photos of Pevensey and Orford.